… doesn’t it!? has it actually been july when i last posted here?

it doesn’t mean i was lazy and didn’t craft, i was just incredibly busy. with work, private life, travelling…

here are some stats from my blog from 2010. quite interesting – so i wanted to share them with you. hope there will be even more posts, more clicks and more visitors in 2011 🙂

The stats helper monkeys at WordPress.com mulled over how this blog did in 2010, and here’s a high level summary of its overall blog health: 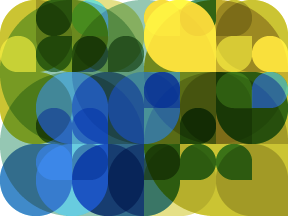 A helper monkey made this abstract painting, inspired by your stats.

The busiest day of the year was October 20th with 345 views. The most popular post that day was pattern: pompon and seeds hat.

Where did they come from?

These are the posts and pages that got the most views in 2010.

thanks to reingard’s intuition when it comes to wollmeise shop updates, i got some new treasures: all of them are 150g, merino superwash.

some new skeins of my favourite yarn in the world moved in recently. 6 new skeins of wollmeise 🙂 yippeee. it’s so hard to get any wollmeise these days, so i sent my parents to the farmers market in sindelfingen where wollmeise had a market stall. they only live about 15km away so it was the perfect chance to get my hands on some yummy yarn. i also got some skeins for my colleague reingard.

my next wollmeise project will be the entangled stitches gloves by julia müller. not sure about which yarn to use yet… and this is my complete wollmeise stash: these socks are 60% made in germany and 40% made in britain 😉 i didn’t like the yarn much in the beginning, but it brings out the pattern so clearly! perfect airy summer socks for my mum. i bet she’ll love them!

i couldn’t take photos of the two socks together yet, because it just doesn’t work wit flash. but here are the photos of the first finished sock. enjoy 😉 i just realized that i never told you my crafting 365 time was over on 19th january! i successfully managed to craft every day for 1 whole year. it was a lot of fun, but i’m also looking forward to craft-free evenings now 😉

here a little photo show of my year… here it is, the first snowbird mitten is finished! 🙂 i love it. it’s such a lovely pattern! hope a good soak will smoothen out the stitches a little…